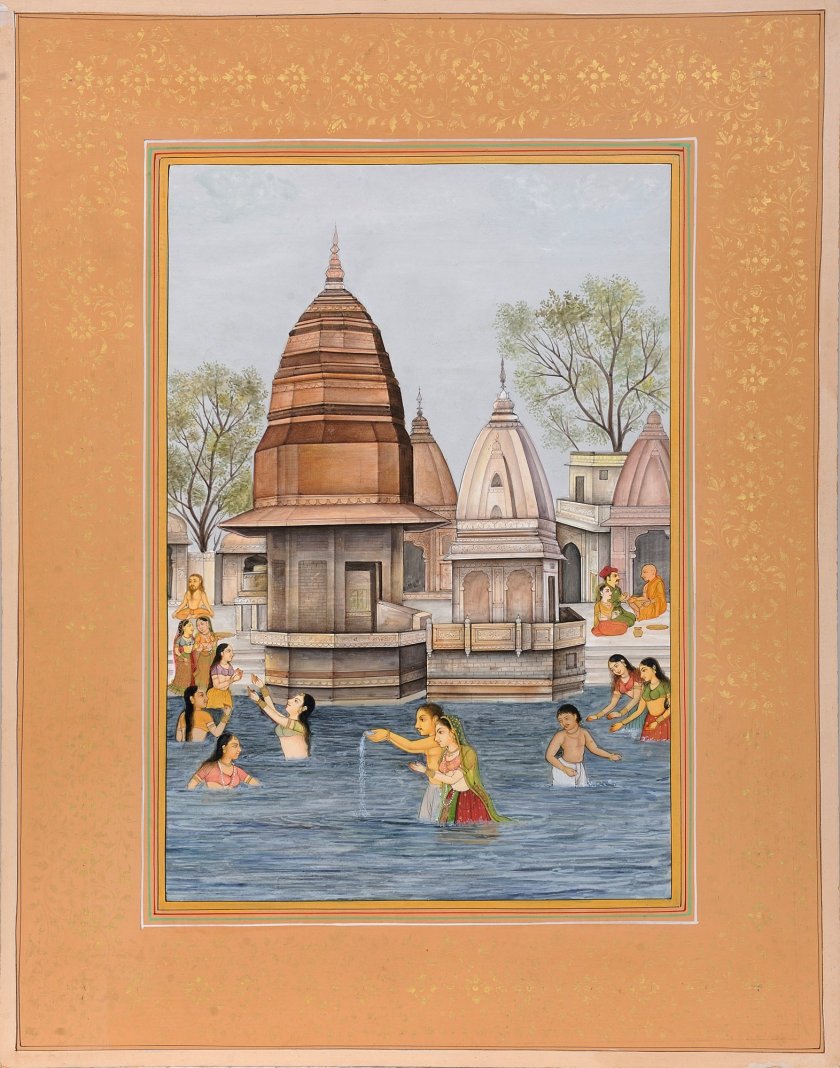 Ghats (riverbanks) are places of worship for the Hindu people. This is because the river is a rich source of nourishment for human settlements, and consequently the ghat the nurturer of the greatest civilisations. The one depicted in this paper watercolour is Har Ki Pauri, which in the local Khari boli means ‘the steps leading up to the lord’. It is said that Shiva and Vishnu had been at the Brahmakund in this ghat during Satyayuga together the Brahmakund is where drops of the otherworldly nectar has touched the earth.

It is the stream in the foreground that is the most challenging part of the painting. Complex brushstrokes in shades and tints of blue have gone into a highly realistic portrayal of the sacred Ganga waters. The couple in the foreground is making an offering to their ancestors, while the damsels nearer to the steps – their black tresses loosened – are busier having a good time than proverbially washing off their sins.

A couple of maidens are simply taking a walk along the ghat, deeply absorbed in conversation. While a wealthier couple sits in consultation with the Brahman to the right of the viewer, a yogi is performing padmasana in the other end of the frame. Note how flawless is each and every detail of the figures – their limbs in motion, their garments in line with traditional Northern fashion, and the shringar of the ladies.

This oil painting has a finish bordering on the surreal. The brushstrokes are rough-hewn, like lines from a receding memory. The tone of the composition is captured in the cowdust hour light that pervades the painting. The same is cut through – coldly, in an almost bizarre fashion – by a collection of delicate, pristine compositions at the potter’s shop.

In fact, it is what dominates the centre of the composition, its peculiarity enhanced by the scantily clad street-entertainer who stands afore the shop and looks on at those works. This painting is of a moment of wonder, of an extent only possible in dream-frame.The rest of the men in the frame pay no attention to her – they are used to her presence, having probably seen as much of her as there is to be seen. The surreal appeal of the painting is complemented by the realistically portrayed earth that dominates a major part of the foreground.

The art of India

A daily selection of the best content published on WordPress, collected for you by humans who love to read.

The art of India

The best longform stories on the web

The latest news on WordPress.com and the WordPress community.